I mentioned before that the main reason I moved to Colorado back in 1993 was because of baseball. Living in Wyoming for the first 40 years of my life, I’d been to exactly two Major League Baseball games.

One was at Wrigley Field in Chicago  and the second was at Yankee Stadium – both in the late 1980s. Reggie was traded to the Angels by then and Ryne Sandberg was still the Cubs’ second baseman. 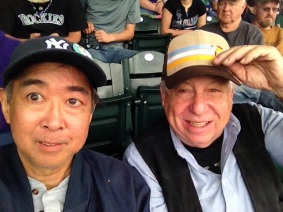 The last time I’d been to a game was around my birthday during early May 2013 when the Yankees were in Denver. I went to all of the four – game stand.

Today’s game was very exciting. I’m not much of a Rockies fan but being with three hard core Giants fans was a lot of fun. Colorado has a rich baseball history, but not much of a baseball tradition among fans or would-be fans.

The stadium was pretty much empty.

Then the Giants loaded the bases in the top half of the 11th and light-hitting Hector Sanchez launches a grand slam home run into the center landscape to take a 12 – 8 lead going into the Rockies half of the 11th. Bearded Giants closer Sergio Romo had a little trouble in a non-save situation and gave up a couple runs and eventually retired the side preserving the 12 – 10 win and avoiding the sweep.

Baseball is a strange game because of all the statistics. For instance, did you know the Giants have a lineup with three Brandon’s – Brandon Hicks, Brandon Belt and Brandon Crawford? Add in the Rockies Brandon Barnes and I believe this may be a Major League record for the number of Brandon’s in a game between two division rivals in April.

Did I mention that the Rockies don’t really have much baseball tradition?

I’ve been to a couple minor league Denver Bears games back in the early 1960s. By that time, the Bears were playing in the old Mile High Stadium and were the AAA affiliate for the New York Yankees. Growing up in the Rocky Mountain West, I was baseball starved, except for the Bears and playing Little League. 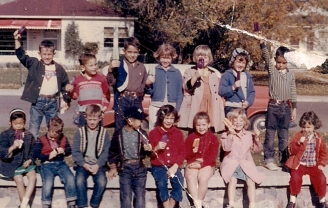 This was taken back in the early 1960s. I’m wearing the Yenkees cap hat given to me by my grandfather. I haven’t changed my wardrobe over the years.

My grandfather brought me a Yankees cap from one of his travels and my dad was a Yankees fan, so that would make me third generation.

My Little League team sold pancake breakfast tickets for a fund raiser and my Uncle George who along with my grandparents ran the Hiway Cafe on the South Greeley Highway.

He sold tickets on my behalf and one year and along with my teammates we all sold enough tickets to earn a trip to Denver to watch the Bears play which was a lot of fun.

I don’t remember any of the particulars of that game but was surprised when my dad came home with tickets to watch the Bears play the Yankees in an exhibition game later in the summer.

We went with a bunch of guys from my dad’s work, including Tony Rizzuto, who was related to former Yankees infielder Phil Rizzuto. We picked a guy I didn’t know who was an airman at Warren Air Force Base who was a big Yankees fan. I’m thinking the game was in 1963 or 64 because first baseman Moose Skowron was traded to the Dodgers by then and Joe Pepitone was the new first baseman

Our seats were in the right field bleachers. Roger Maris played a couple innings in right field and Mickey Mantle was in center. Bobby Richardson was at second, Tony Kubek at short and Clete Boyer was at third.

I think Yogi Berra was the manager and Ralph Houk was the general manager by then. Seems like Jake Gibbs got most of the catching duty that game, but Elston Howard and John Blanchard were still the main catchers.

Seeing that game is a highlight in my life experiences.

This is the 1961 Topps card with Bill Mazeroski rounding the bases after winning the 1960 World Series with a home run.

I started following baseball when we got a TV set in the early 1960s. I remember watching the World Series that year and the Yankees losing to the Pittsburgh Pirates.

The image of Bill Mazeroski rounding the bases is still etched in my mind and to this day – remember? He hit the World Series – winning home run,

I’m still not much of a Pirates fan. Anyway, the following season was the friendly duel between Maris and Mantle in their quest to hit 61 home runs to surpass Babe Ruth’s record of 60. 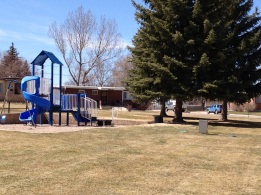 Many a baseball game was played at the Triangle Park in the Cole Addition of Cheyenne, Wyoming. The playground equipment is in the middle of what was our infield.

During that summer of 1961 my school mates played pickup baseball games at the Triangle Park in the Cole Addition of Cheyenne. Sometimes we played only with two or three on each side, but I do know that Husty Twitchell belted out 61 home runs well before Maris!

Part of my rekindled addiction to baseball – baseball cards.

I dug out a bunch of my baseball cards from storage. It had been maybe 15 years since I’d browsed through my collections. Back in the late early 1990s I traded all of my bulk collection for a start on the challenge of certain Yankees teams.

I started with the 1961 and 62 teams that won back to back World Series Championships, 1953 Yankees, which is my birth year. The toughest are the 1932 Yankees which still have Babe Ruth and Lou Gehrig on the roster. 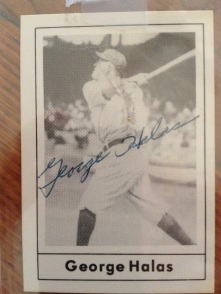 My final Yankees collection is the 1919 team. I was surprised to learn that George Halas – founder of the Chicago Bears and the NFL was on that team.

When I stopped paying attention to my hobby, I started collecting the 1919 Yankees – which was the year of the infamous White Sox cheating scandal.

The main reason I lost interest in the hobby was because of the glut or cards on the market and rise of the internet, which took all the challenge out of run-of-the mill collecting.I did fill out the few cards in the 1961 set I collected using ebay. When it gets down to the last few items of anything in a collection, you just want to be done with it, right?

Now that ebay has become better, I have found that ebay is really the only way I can fill out the 1919 collection since the cards and autographs are so scarce.

Back to baseball tradition.

I supported the Rockies from 1993 to 1998 and gave up my season tickets after the All Star game. That was quite the event for Denver and I’m glad I was able to experience it.

Compared to the Florida Marlins, a team that came into the league the same year as the Rockies, that franchise has enjoyed much more on-field success than the Rockies. The Marlins still have trouble filling the stadium seats, but have had better success on the field. 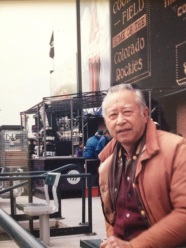 The few times I’ve been to Yankee Stadium and Fenway Park in Boston, the air is electric. The fans are dedicated. Not only are all the seats filled, but the bars and restaurants around the parks are filled, too.

The Rockies are on track to have another mediocre season, but team management is poised to make a lot of money from the casual Rockies fans.

There’s no doubt that the New York and Boston markets have way more baseball tradition and only time can develop that.

I’m not sure how that will work out here in Colorado since the starting point of team ownership seems to be more about making as much money as possible and getting by with an inconsistent team on the field.

Although Rockies GM Dan O’Dowd is looking like a fantasy baseball genius by getting rid of Dexter Fowler and replacing him with Charlie Blackmon in center field.

Speaking of center field, it used to be that the upper center field deck was often times empty because no tickets were sold there because attendance was so low. 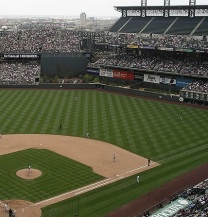 This year, additional seats were added and a premium bar – restaurant experience was added called The Roof Top.

My party didn’t make it up that far today, but it looked like everyone was having a good time.

I hope I’m wrong and the Rockies have a great season and make it to the World Series, so at least those patrons in the Roof Top bar will have something to cheer about.

Meanwhile, I’m looking for an autograph of 1932 Yankees coach Jimmy Burke, if anyone happens to have one laying around.