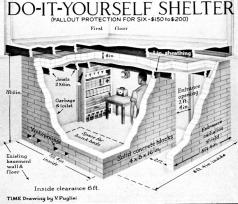 This is what our bomb shelter looked like, particularly the separate wall that made for a vestibule.

Being self-isolated during the COVID-19 pandemic is a throwback to my childhood. In the cohousing community we’ve agreed upon how to support one another in the event of illness, lack of food, and when cleaning supplies are short.

The Cohousing Association of the US is sponsoring a series of webchats providing a way for communities to share their “secret sauces” about preventing the spread of COVID-19.

The community common house, and that of the cohousing community across the street would be good large-scale places for others in the neighborhood to shelter in place, if need be. More likely in the event of a bad storm.

As a course of our day-to-day cohousing lives, the community keeps stores of paper towels, toilet paper, and cleaning supplies on hand. When this coronavirus thing blows over, we’ll refine our civil defense protocol.

The mutual support that’s come about today is a lot like how things were back during the Cold War. My family and extended family were tight-knit enough to hunker down together while preparing for the impending nuclear holocaust.

We were the only household in the neighborhood to build a “fallout” shelter. In the 1964 Barry Goldwater favored the use atomic warfare to end the Vietnam war. I’m pretty sure my dad voted for Goldwater, which may be one reason behind our family civil defense project.

Similarly, during the early stages of the COVID-19 pandemic, there was a high degree of international and national tension. but soon friends and foes worked together to slow the viral spread.

As for COVID-19, it’s pretty easy to build consensus around stomping out a bad virus, since there are no people involved, and, for example, no disagreements around having to determine who are the good nazis compared to the bad nazis.

Baby Boomers and older likely remember October 1963 when Russia installed nuclear missiles in Cuba in response, in part to the botched Bay of Pigs invasion to take back Cuba from Fidel Castro. There was a political stand off between President John Kennedy and Russian premier Nikita Khrushchev. Lots happened after that, JFK was assassinated, some conspiracy theorists think that was somehow connected to the Bay of Pigs, and the missiles of October.

While I was growing up, Cheyenne had the highest concentration of nuclear missiles in the country. Francis E. Warren Air Force Base was the command center for the Atlas missile program following World War II. The Department of Defense figured out that a better way to deploy nuclear weapons was to install lighter weight nuclear warheads on rockets. Missile installation was a booming industry in middle-of-nowhere places like southeast Wyoming.

Not that we were any safer, but my parents decided to build a bomb shelter in the basement of our home in the Cole Addition, one of the suburbs on the east side of Cheyenne. Suburban growth was a result of the missile boom.

I imagine the bomb shelter was for peace of mind more than anything.

One of the guys who worked for my dad at the Coke plant was Bill Fisher. He was a veteran of World War II and the Korean War and lived in the basement of a house that was started but not built. Part of the foundation was completed, but there were dirt tunnels where he kept stuff. I was never quite sure what to make of Bill living underground in a series of tunnels.

He was a hermit, maybe that was PTSD-related, but very smart about science. He worked around the plant sorting bottles, helped on the production line, but his main job was working on the vending machine refrigeration systems.

His place was located across the street from the Coke plant. When I went to work with my dad on Saturdays, I goofed around inside the plant, but eventually made my way over to Bill’s.

He subscribed to “Things of Science” which was an educational program launched by the nonprofit news syndicate Science Service in November 1940. The program consisted of a series of kits available by subscription and sent by mail monthly. 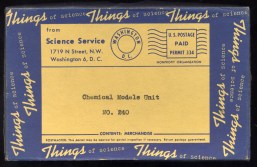 My interest in science was reinforced by the Things of Science kits given to me by Bill Fisher.

They were packed in a small blue cardboard box about the size of a portable hard drive with a yellow address label. Included inside was a simple science project. I remember one being a crystal radio set, and another was a small motor run on electromagnetic current – battery not included.

Bill had the little boxes categorized by year and stacked up on a ledge in a niche carved into the dirt wall of his of literal “man cave.”

One Christmas, he bought me a subscription – the cost was $5.00 for the year. He was a quiet guy. Since he had no family, Bill was always invited over to our place for Thanksgiving. On Christmas, we always stopped by to see him and drop off a gift and some food on our way to the grandparents’ for Christmases 2 and 3.

Anyway, Bill had done research about bomb shelters and helped build ours. Bill was also a very meticulous mason. He taught me how to mix mortar, and lay blocks, which are life skills I’ve used on occasion over the years.

Our shelter was located in the northeast corner of the basement at the bottom of the stairs, which made for easy access. There was also a window well that led to the outside. Bill welded together an air shaft from steel pipe that led from inside the shelter and vented to the outside.

There was a set of surplus bunk beds, a pantry where canned goods and water were stored, along with plates and table ware. The fallout shelter temperature was always the same and was a good place to hang out during hot summer days. There wasn’t a place to cook, but there was a Sterno camping stove that could heat up a can of soup in a small space. There was a downstairs bathroom, but in the shelter the toilet was a galvanized steel port-a-potty with a sealed cover.

The threat of nuclear attack was real, but largely theoretical. If Cheyenne was targeted, a missile that hit in Torrington, would be considered, “close enough.” The main reason for the shelter was protection from “fallout,” the residual radioactive dust spewed into the upper atmosphere following a nuclear blast and eventually fall back to earth. The amount and spread of fallout is based on the size of the weapon, the altitude at which it is detonated, and prevailing winds. Since Cheyenne is so windy, locals though any fallout would be blown to Nebraska and Colorado.

In school, we watched short Civil Defense movies and film strips about how to prepare for a nuclear attack, “Do not look at the fireball,” we were warned. There were air raid drills similar to fire drills, except we sheltered in place. One exercise was to dive under our desks and cover our heads with our hands or a pulled over garment.

We also practiced exiting the classroom and going down into the school boiler room that was manned by the custodian, Mr. Costello.

I collected cards like this Roger Maris from the backs of a Post cereal boxes. This particular one was a “giveaway” from a LIFE magazine ad.

During the summer time, I liked to go to the grocery store with my mom. Not that I like shopping, I stood in the cereal aisle looking at the backs of all the Post cereal boxes that had panels of baseball cards looking for the ones that had the most New York Yankees players – particularly Mickey Mantle and Roger Maris.

After returning home from the store, one of my jobs was to rotate the bomb shelter canned goods out and replace them with the new stock. The cans were dated using a magic marker. I’m still a food hoarder based on those days. Rather than buying one can of Beeferoni, I get four.

My dad and I spent Saturdays making the rounds at the local war surplus , Goodwill, and Salvation Army stores looking for items that would make living in the bomb shelter with some of the creature comforts, like extra can openers, and cooking utensils. That’s a habit a learned from my dad. I don’t have one tool kit, I have five – one in the car, house, garage, and two in my office – one dedicated to the camera equipment.

One item was a manual air circulator. I don’t think that thing was ever hooked up.

After Khrushchev backed down to JFK and the nuclear weapons were removed from Cuba, tensions decreased, even though there continued to be an escalation in the arms race between the United States and Russia. While the threat of nuclear war was lessened, everyone was more aware and vigilant as a result of preparing for an unforeseen war.

At my cohousing community, early on, there were some who didn’t think the COVID-19 thing was any big deal. They attended the community dinners with hubris. There are others who have self-isolated since the beginning.

Since then the community approved a set of guidelines concerning use of the common house. Most of my neighbors have come around, don’t go out much, and observe social distancing when talking to neighbors. If the governor orders Coloradoans to stay home, our cohousing community has been observing much of how that’s being handled in California. Since we’re all over 60 here and a “vulnerable” demographic, we may get more flexibility. I saw that Safeway now offers “senior hours” from 7am to 9am on Tuesdays and Thursdays.

Today, we’re celebrating one neighbor’s 80th birthday outdoors in the courtyard. Hopefully, the prevailing winds will keep any airborne COVID-19 away from the party. Even if they don’t, I have peace of mind knowing that there is a stash of toilet paper in the common house basement.

I’ll be at the birthday party in spirit.