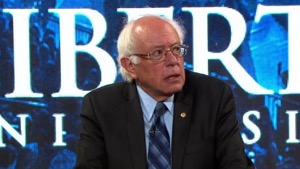 While many conservatives respond to Bernie Sanders’ speech at Liberty University with frustration, dismissing him as a left-wing socialist, one Liberty graduate was not so quick to dismiss Sanders. In fact, he argues that Sanders is the candidate campaigning on the principles of Christ. “When I heard Bernie speaking in that way, when I saw that guy on stage at Liberty University, I saw John the Baptist. . . .crying out to the religious leaders, the Pharisees of his day,” said the graduate, calling himself Jim, “calling them corrupt and complicit with those who have all the power and all the money and all the wealth, and abandoning the people that God loves, that God cares about…”

I give a few bucks to Bernie Sanders from time to time. In exchange for that I get emails all the time. They generally end up in the trash, but this was of interest to me because he spoke at Jerry Falwell’s Liberty University about the importance of equality from a biblical – Old and New Testament – perspective.
Dear Alan,

Earlier this week I spoke at Liberty University. For those of you who do not know, Liberty University is a deeply religious institution. It is a school which tries to understand the meaning of morality and the words of the Bible, within the context of a very complicated modern world. It was founded by the Reverend Jerry Falwell, and the vast majority of people at Liberty strongly disagree with me, and perhaps you, about abortion, marriage equality, and other issues.

You might be asking yourself, “Why on earth would Bernie Sanders go there?” It is a fair question within the context of our modern politics.

I spoke at Liberty University because I believe that it is important for those with different views in our country to engage in civil discourse – not just to shout at each other or make fun of each other.

It is very easy for those in politics to talk to those who agree with us – and I do that every day. It is harder, but not less important, to try and communicate with those who do not agree with us and see where, if possible, we can find common ground. In other words, to reach out of our zone of comfort.

So I went outside of my zone of comfort. Watch this video of my remarks there and read what I have to say about the ideas of morality and justice as they relate to income inequality and other critical issues facing our nation.

The message I gave at Liberty University is that the moral choice is to fight income inequality, and that the just thing to do is to work to make our society more fair. Below are some of my remarks to Liberty from the video above, but I think it is important to share them with you here as well so that you can share with others how I approach these issues.

I told the crowd at Liberty University that I understand that issues such as abortion and gay marriage are very important to them, and that we disagree on those issues. I get that. But there are other issues out there that are of enormous consequence to our country and the world and that maybe, just maybe, we don’t disagree on them. And maybe, just maybe, we can work together in trying to resolve them.

Justice. Treating others the way we would like to be treated. Treating all people with dignity and respect.

It would, I think, be hard for anyone in that room where I spoke to make the case that the United States today is a “just” society or anything resembling a just society.

In America today there is massive injustice in terms of income and wealth inequality. Injustice is rampant. We live in the wealthiest country in the history of the world but most Americans don’t know that because almost all of that wealth and income is going to the top one percent. We are living at a time where a handful of people have wealth beyond comprehension – huge yachts, jet planes, tens of billions of dollars, more money than they could spend in a thousand lifetimes. But at the same time, millions of people are struggling to feed their families or put a roof over their heads or find the money to go to a doctor.

When we talk about morality and when we talk about justice, we have to understand that there is no justice when the top one-tenth of one percent own almost as much wealth as the bottom 90 percent. There is no justice when all over this country people are working long hours for abysmally low wages, $7.25 an hour or $8 an hour, while 58 percent of all new income being created today goes to the top one percent.

There is no justice when, in recent years, we have seen a proliferation of millionaires and billionaires while, at the same time, the United States has the highest rate of childhood poverty in the industrialized world. How can we talk about morality when we turn our backs on the children of this country? Twenty percent of the children in this country live in poverty and that includes 40 percent of African American children. There is no justice when, in the wealthiest country in the history of the world, children in our country go to bed hungry.

There is no justice when thousands of people in America die each year because they don’t have health insurance and don’t get to a doctor when they should, or when elderly people are forced to choose between food or medicine because our citizens pay the highest prices in the world for prescription drugs. That is not justice. That is not morality. That is simply an indication that we are the only major country on earth that does not guarantee health care for all as a right.

There is no justice when low-income and working-class mothers are forced to separate from their babies one or two weeks after birth and go back to work because we are the only major country on earth that does not have a paid family and medical leave policy. That is not justice. That is an attack on family values that everyone should be appalled at.

There is no justice in our country when youth unemployment exists at tragic levels – with 51 percent of African American high school kids unemployed or underemployed. No. We apparently do not have the funds to provide jobs or educational opportunities for our young people but we sure do have the money to throw them into jails. Today, the United States has more people in jail than any other country on earth, and many are serving time in inhumane conditions. That is not justice. That is the destruction of human life.

I am not a theologian or an expert on the Bible or a Catholic. I am just a U.S. senator from the small state of Vermont. But I agree with Pope Francis when he says: “The current financial crisis… originated in a profound human crisis: the denial of the primacy of the human person! We have created new idols. The worship of the ancient golden calf has returned in a new and ruthless guise in the idolatry of money and the dictatorship of an impersonal economy lacking a truly human purpose.”

He also states: “There is a need for financial reform along ethical lines that would produce in its turn an economic reform to benefit everyone. Money has to serve, not to rule.”

In his view, and I agree with him, we are living in a nation and in a world which worships the acquisition of money and great wealth, but which turns its back on those in need. And that must end. We need to move toward an economy which works for all, and not just the few.

Throughout human history there has been endless discussion and debate about the meaning of justice and the meaning of morality. I hope that by getting out of my comfort zone and speaking with the students at Liberty University that I can be a part of a dialogue with people who might not agree with us. I hope that some of them conclude that if we strive toward morality and toward justice, that it is imperative that we have the courage to stand with the poor and working people of our country.