This is a picture of my dad and me in front of our first house on 10th Street in Cheyenne, Wyoming.

My father died in 2003 and my two grandfathers passed on many years before that. I haven’t mused about them, really.

All three were sports fans, but none followed professional basketball. The NBA championship series ends on Fathers’ Day Sunday with the Warriors hosting the Cavaliers in Oakland. It’s been a weird series with a lot of blow-outs and down to game seven. I was too short for the organized game but could hold my own in pick up games. I’ve played enough to know the rules.

My paternal Grandfather Ohashi was named Toichi but known as George. I don’t know exactly when he emigrated from Japan, but it was in the later part of the 19th century. He and apparently one or more of his siblings initially ended up in Alaska.

There’s a photograph of him hustling pool someplace in Alaska, which I will dig out. When I was on a trip with the Presbyterian Church to Sitka, Alaska we took a ferry boat ride up and down the panhandle.

While in Ketchikan, my pal Sam Allen from Cody and I came upon a sign that said OHASHI Candy and Tobacco. Turns out it was owned by my Great Uncle, my grandfather’s brother who’s name escapes me. I was later at a conference in Seattle a few years ago and ran into an Ohashi who was a niece and a distant cousin of mine.

This picture of my Grandfather Ohashi and me must have been taken on Fathers’ Day in front of his house.

His game of choice was billiards. I’m pretty sure he was a nine ball hustler. He owned a billiard hall on 17th Street in downtown Cheyenne. I inherited one of the pool tables when the pool hall closed and had it set up for many years, but when I moved to Colorado, I donated it to the Ethete Senior Citizen Center. I kept an old 9 ball from the rack. He was going blind, but could still hit a few trick bank shots.

My cousin Matthew from Salt Lake and his dad got me started collecting and scrounging up old stuff. He had an old Phillip Morris poster in there that I wanted, but couldn’t get freed up. I’ve wondered what happened to that item. 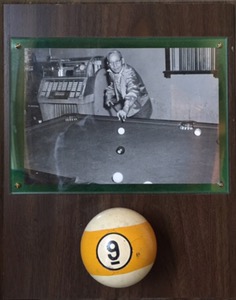 My Grandfather Ohashi in his downtown Cheyenne pool hall.

He developed diabetes later in life and couldn’t see very well. His spectator sport of choise was boxing. Back in the 1960s, there were only black and white TV sets. My dad and I would visit him and watch the Friday night fights. Boxers wore white or black trunks and it was easy for him to follow. He got pretty sick and moved into our house on 10th Street for a period of time. I was young but had to give up my room to my grandfather. I can’t remember how long he stayed, but he let me give him his insulin injections in his thigh. That was back in the day of those huge needles

He and my grandmother owned the Highway Cafe on the south Greeley Highway. He originally was a truck farmer from Brush, Colorado. He drove around an old panel truck and picked up produce from the farmers and sold them from a fruit and vegetable stand next to the cafe. It was nestled against a bluff where Interstate 80 would eventually pass and they moved a few blocks north. The Building still stands today, but is now a tobacco store.

Every once in a while I got the job of writing the new $1.00 specials on the black board. It was stuff like hamburger steak, egg foo yong, liver and onions. There was a Filipino guy named Carl who came in every night and had a half order of the special. The famous Cheyenne fisher Hank Okamoto came in from time to time showing off his string of fish. He was a fishing buddy of my Uncle Rich.

My dad brought my sister and I one at a time and together to the cafe. He cooked there after he finished working and after dinner. I don’t know this for fact, but it seemed to me the state Public Health Department put them out of business. The last straw was when the state required a vestibule to be constructed between the public area and the restroom, of which there was only one and not two.

Likely the same Fathers’ Day visit around town. This is my Grandfather Sakata and me on the porch of their home on Capitol Avenue.

My maternal Grandfather Sakata’s name was Jusaburo, but he was called Joe. There’s a Cheyenne history book that has the details about his emigration to Wyoming, but off the top of my head he came from Japan, then returned for my grand mother who was 20 years younger. What I mostly remember is he worked for the Burlington Railroad.

Back then it was known as the Chicago, Burlington & Quincy Railroad and he was the section foreman at a place called Orpha, Wyoming. Orpha still is there and located across the road from the Fetterman Battlefield State Historic Site.

I went to visit a few years ago. Many years before when I was in junior high school, my sister and I spent the summer irrigating on the Shinmori beet farm near there. We took a tour of Orpha which included the one room school, and the house where my mom’s family lived. Only the foundation remained when I last went to look around.

He and my grandmother moved to Cheyenne. The Burlington Northern railroad used to run through Cheyenne so I’m thinking he retired there. My mom, who was the youngest of the three kids ended up in Cheyenne, too. In his retirement, he became a gardener and did yard work for some of the neighbors around their home on Capitol Avenue a couple blocks from the state capitol building. That was one of the resupply depots for soda pop that we sold along the Cheyenne Frontier Days parades.

This is a neighborhood field trip to tour the Plains Dairy in Cheyenne. Notice I’m wearing the Yankees cap given to me by my grandfather.

His game of choice was baseball. My aunt lived in Washington DC and he watched the Senators play. He went to New York and brought me back a cap and pennant from Yankee Stadium in 1960. That was the first year I followed baseball. I’ll never be a Pittsburgh Pirates fan having watched Bill Mazeroski homer in game seven to beat the Yankees.

When I graduated from high school, I remember getting his wise words in Japanese – but my grandmother reminded him that I only understood English and got the speech again in English.

Language was a barrier keeping me from knowing my grandparents better. Of course, after World War II, that was a big wake up call for the Japanese American community. Even in the middle of nowhere Wyoming, there wasn’t any Japanese spoken around the house nor were Sansei kids – third generation – expected to learn Japanese nor retain much if anything about the culture, although I still prefer rice with my eggs. The 20th Street Cafe run by a Japanese family serves eggs with rice upon request.

I learned to be self sufficient, but that may have been because I was boy. When I graduated from college, I lived at home for a couple years while in grad school at the University of Wyoming. I think my parents appreciated that.

My father, Frank, worked his entire career at the Coca Cola plant in Cheyenne eventually becoming the manager. When the business was sold to the Ludwig family in Laramie, my dad was a part of the deal. When I was a sophomore in college and away in Hastings at the time, they moved over the hill to Laramie. I remember going to that house on Downey Street for the first time. I didn’t know which drawer the forks were kept.

When I was in high school, I worked summers for him at the Coke plant. That was an eye opener for me seeing him in a capacity other than at home. He managed like it was a basketball team – he was a pretty good basketball player on the Cheyenne High School team. He didn’t ask anyone to do anything he didn’t do himself. That’s one thing that rubbed off on me. I remember him chewing out a guy, who came to work drunk and eventually was fired. It was the first time I’d heard him swear like a sailor.

One time I was caught shoplifting and the condition of my staying out of the system was fessing up to my dad and he calling the store manager. That was by far the hardest thing I’ve had to do in my 63 years. I don’t think he told my mom about it.

He was always supportive of my activities, even later in life. When I played in the Fremont County orchestra, there was a performance in Laramie. Very few people were in the audience, but my dad was there. He pushed me to get my Cub Scout activities completed. I made it up to getting my “Bear” patch before Pack 113 folded. He was asked to take over, but it wasn’t his thing. 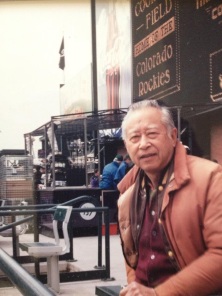 My dad at the first game at Coors Field in 1995

My dad was quite athletic. He was a sports fan and knew the rules to a lot of games. He had good hand eye coordination and was a pretty good bowler, golfer and basketball player with a wicked hook shot. We played softball together in church league and had a good change up which fooled hitters even in slow pitch. As a spectator, he and my mom were avid Wyoming Cowboy fans.

He also was a Yankees fan. One of his Coca Cola plant truck drivers was a guy named Tony Rizzuto, who was related to  former Yankees 2nd baseman Phil Rizzuto. A bunch of guys from work a a guy from the air base all loaded up in my dad’s car and drove down to Denver to watch the Denver Bears play an exhibition game against the Yankees. That was in 1964. It was great seeing Mantle and Maris play.

Coors Field opened in 1995, the replacement Rockies played the replacement Yankees in the strike-shortened year. I took my dad to watch that game. The Rockies made the playoffs that year too.

What about the name O’Hashi?

Nobody knows for sure, but the O’H is attributed to a school administrator who changed his name when he found out his birthday was March 17th – St. Patrick’s Day. Only my dad and his youngest brother Jake used the anglicized spelling.

I haven’t figured out what I’m going to do on Sunday, probably not watch the basketball game since my team, the Celtics, aren’t playing. The only tie I have to the Dubs is back in 1980 when the Warriors traded Robert Parrish and top draft pick Kevin McHale to Boston. The Celtics won the championship in 1981.

How I ended up a Celtics fan is another story, but it dates back to when Wyoming center Leon Clark was drafted by Boston in 1966.

I doubt I’ll watch the game. I did pick up a ball at the Sports Authority liquidation sale and may shoot a few hoops someplace.

Whatever your Fathers’ Day memories are, I hope they are fond ones.

My sport of the day? I’m going fishing if the water isn’t too high.