CHEYENNE, WYOMING – Memorial Day is upon us again. When I was a kid growing up here, the Japanese had a big carry-in picnic at Holliday Park – lots of sushi rolls, teriyaki chicken, abalone salad – bento box type food.

I think because this park is closest to the cemetery is why we all met there.

A couple of the guys brought over boxes and boxes of flowers. After the first go-around of food, everyone went over to the Lakeview Cemetery and placed flowers on all the Japanese graves. There wasn’t much reminiscing that happened, but that was just the “inscrutable oriental” way.

The Cheyenne Japanese community used to be fairly large. One of the gathering places was the original City Cafe that was run by Mrs. Shuto and later her son, Tommy.

The Japanese grave markers in the Lakeview Cemetery. I grew up in the Cheyenne suburb Cole Addition Japanese Ghetto – Nakano, Kubota, Shiba and O’Hashi. It was also the home for several Greek families – Contos, Hatanales, Talagan, Mears.

Occasionally, my family went over there to watch black and white samurai movies and listen to music. In the back, the old guys were screaming and hollering during their rousing game of hanafuda (flower cards) that also involved slapping the thick cardboard cards on the table.

I didn’t learn how to play. I don’t think the rules were written down anywhere back in those days and I didn’t understand Japanese if someone tried to explain them to me.

Since I happened to be in town, I stopped over and decorated my family’s graves at the cemetery east of Cheyenne on the old Lincoln Highway. I overshot the exit on I-80 and on my loop back on Highway 30, I picked up a hitchhiker named Chris. He’s from Huntington, WV home of Marshall University (“We Are Marshall”). 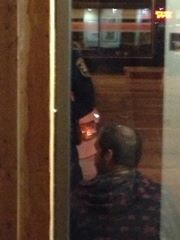 Cheyenne’s finest questioning a guy sitting in front of the Hynds Building during the Cheyenne International Film Festival earlier this week.

He was walking back to the Pioneer Hotel from his job as an irrigator on a farm east of town. it would have been at least a 10 mile walk for him. He was lamenting about the high cost of housing in Cheyenne and that the Pioneer meets the needs of men who have jobs, but can’t afford traditional housing. He’s only been in Cheyenne for a month, but has noticed the discrimination that the Pioneer Hotel residents and homeless people face.

Anyway, he went to the cemetery with me while I decorated the family graves before I dropped him off at the Pioneer. He was looking forward to the extra day off after toiling in the fields. As we passed a convoy of Wyoming Highway Patrol, we both agreed that Memorial Day weekend would be a good time to be on foot and not driving a car.

When the Issei and Nisei generations started passing on, the Memorial Day picnic tradition pretty much stopped.

I was curious about Memorial Day and how it all got started. This is what wikipedia has to say about it:

The first Memorial Day was observed in Charleston, SC after the Civil War.

“The first widely publicized observance of a Memorial Day-type observance after the Civil War was in Charleston, South Carolina, on May 1, 1865. During the war, Union soldiers who were prisoners of war had been held at the Charleston Race Course; at least 257 Union prisoners died there and were hastily buried in unmarked graves.

Together with teachers and missionaries, black residents of Charleston organized a May Day ceremony in 1865, which was covered by the New York Tribune and other national papers. The freedmen cleaned up and landscaped the burial ground, building an enclosure and an arch labeled,

“Martyrs of the Race Course.” Nearly ten thousand people, mostly freedmen, gathered on May 1 to commemorate the war dead. Involved were about 3,000 school children newly enrolled in freedmen’s schools, mutual aid societies, Union troops, black ministers, and white northern missionaries. Most brought flowers to lay on the burial field. Today the site is used as Hampton Park. Years later, the celebration would come to be called the “First Decoration Day” in the North.”

I don’t think Memorial Day became “official” until several years later when the politicians took hold of it.

I haven’t been in town for Memorial Day. I stopped by today and decorated my parent’s and the other family head stones.

There are still a number of Sansei in Cheyenne and the surrounding area, including my sister, some cousins and myself. My uncles and aunts and the Nisei generation don’t have the energy they once had for organizing any big activities like the Memorial Day picnic. Every year, I think about getting in touch with everyone, but I don’t have the energy for it either.

This has nothing to do with honoring fallen soldiers – but from here on out, Memorial Day will be memorable for me since my autoimmune health issues began shortly after I finished the Bolder Boulder 10K foot race in 2013. I’ll let you know how the acupuncture treatments are going.

I ended up taking a swig of O2 coming up the final Folsom Hill, I’m still swelled up from the steroids.

After tapering off the steroids for my lung problem, It was an unknown adventure. My neighbor Henry drove my across the sidewalk neighbor, Jim and I to the Bolder Boulder start point. I was unsure how far I could make it since my practice is NOT to train for races. The only training has been occupational therapy walking from place to place.

When I dug my shoes out of the closet last night, I noticed that they didn’t quite fit right. My ankles are still swelled up for some unknown reason and the muscle mass of my feet was also less than it was – nothing a little cinching up won’t fix The last time I trained for a race was for a 5K in Lander many years ago, when I twisted an ankle. Since then, I’ve just taken my lumps during the real thing.

After making it past the first mile, I felt like I’d be able to finish the course. My practice is to film snippets of each of the  bands along the route, which slows down my pace a bit. My mission is to complete the race before the mop-up crew gets out there.

I’m 15 pounds lighter than I have been, but carried my oxygen bottle just in case. I did have to take a few boosted breaths midway up the Folsom Hill on the way into the stadium. Other than that, I felt pretty good. In the past, even last year, around the 5K mark, the interior part of my knee joint would begin to hurt and my thighs would cramp, but not today. I attribute that to eating better and not having so much crud built up in my scrawny muscles.