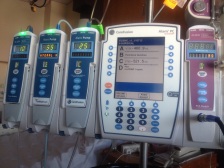 My robot care givers – monitors that check out how I was doing at any moment. In the cover photo, those are 1 pound weights on my walker that I struggled with lifting. I wondered what I was going to do with my grandfather’s bamboo cane – use it of course. The rubber bands were for physical therapy.

Here it is February 1, 2019. Five years ago today I returned home from the hospital and rehab after six weeks on my deathbed, losing 30 pounds (20 percent of my body weight), and surviving two surgeries.

I’m glad that my visit from the Ghost of Christmases Yet to Come is behind me. It gave me a view of what the end of my life would be like and I better keep living it up while I can.

I made a documentary about my experience called “Aging Gratefully: The Power of Community” that’s available to watch.

During the ensuing five years, I’ve become Medicare-eligible and my memory isn’t the steel trap it used to be and I’ve learned to quit living in denial and ask for help.

My experience was so profound, I’m more than willing to talk to you or your community about the “why” part of cohousing.

When I moved into a senior cohousing community, I didn’t really know what that was about until I was unable to take care of myself. I knew I was aging, but didn’t think it would happen this fast!

In the cohousing community, we all own our own homes, and have agreed to be supportive of one another as good neighbors and chipping in on chores around the complex – it’s akin to running a family business and everyone lives on site.

Cohousing goes contrary to the American tenets of rugged individualism and self determination. In the non-cohousing world, asking for help is seen as a sign of weakness or a sign of superiority. In the cohousing world, it is neither. I have had to learn how to ask for help.

When I was in the hospital, I couldn’t walk and could barely lift my arms. I was fed gunk through a tube that flowed directly into my heart. I generally don’t speak in absolutes, but in this case, I had never felt so helpless in my life. I was left for dead until a laboratory at the University of Michigan figured out that I had an odd ball interstitial lung disease, some sort of fungal pneumonia, which was easily treatable with run-of-the-mill sulfa drugs. It’s the type of pneumonia AIDS patients and over-worked people like me get when the immune system gets beat to crap. Much of that was “out of network”, but I digress.

I’m self-employed and have always been able to take care of all my assignments, except those that were due in January 2014. The last thing I thought I wanted was a lot of people knowing that I was flat on my back and unable to finish what I had committed to do.

As far as most people knew, I was fit as a fiddle. I needed help and I didn’t know how to ask for it, even in desperation.

I had a contract to travel around Wyoming and make tribute videos for the Wyoming Governor’s Art Award recipients. I liked the gig because it got me on the road and a chance to meet some interesting people. A friend and colleague, Michael,  stepped up to finish this job that entailed driving around Wyoming in the dead of winter.

There was a huge final report on a state of Wyoming film incentive grant for a movie project shot over the summer of 2013. Another friend and colleague, Barbara, finished counting all those beans for me.

Every year, I produce news coverage of the Boulder International Film Festival, which includes scheduling production crews. That turned out to be a bit of a debacle, the guy I lined up wasn’t as good at fast filmmaking and how to produce quick-turn-around news packages as I had hoped. Now, I’ve shared the responsibility with another guy, Glenn, who could easily pick up if I dropped out of sight.

I now come up with a  “plan B” for short term projects. Michael, Barbara and I collaborated on a short movie a few years back and want them to disassemble my business if I get too out of it. I still have to find someone to handle my baseball card collection.

When I returned home from rehab the day before Super Bowl XLVIII the community was very welcoming. I wheel chaired myself to the common house for the Super Bowl party, but had to leave at halftime since the tube sticking out of my abdomen started to leak (TMI).

My digestive system wasn’t quite ready for nachos. My septic ulcer repair wasn’t totally healed up.

I intellectually understood the “what” of cohousing, but didn’t get the “why” of cohousing until I was nearly dead.

Learning how to cram a cohousing  square peg into the rugged individualism round hole is by far the toughest aspect of living in what amounts to, a socialistic system where work is spread equally for the common good.

Asking for help is a constant in cohousing for the good of the whole.

We’re trying to keep the ship moving in the same direction and it’s tough to make that happen if crew members are off doing their own thing, don’t instinctively pick up any slack, or forget to perform a task – never ending reminder emails are a reality in a community of seniors with various stages of memory loss.

By the way, have you seen my keys?

In the outside world, people ask, to be polite, “Let me know if I can help.” In the cohousing world people ask, “What can I do to help you now?” being intentional about it. At my place, for example, we have a list of people who will contact caregivers, drive a neighbor to the doctor or hospital, at any moment. I look at it as paying it forward – You need a jump? I have cables. You’re in the hospital? I’ll stop by when I’m out today.

In my way of thinking, cohousing is very mission driven and best functions using the team approach. When I was in high school, there were the kids who had to be involved in every school activity and be on every page of the yearbook – drama club, 1,2,3,4; newspaper staff 1,2,3,4…

My community has evolved to become more transparent. Every year, for example, everyone’s HOA dues are known. Intellectually, we strive for fairness, but any objective formula, while “equal” isn’t always subjectively “fair.”

We’re having very frank and open discussions about MONEY issues. It’s taken 10 years of community maturity, but everyone is letting loose of wanting control.

I don’t have much interest in Super Bowl LIII, but a soft spot for the Rams and three Broncos castoffs – Wade Phillips, Aqib Talib and CJ Anderson.

While I wouldn’t trade my stint in the ICU for anything, what I learned about myself was life changing, but I don’t recommend it as the best way to lose weight.